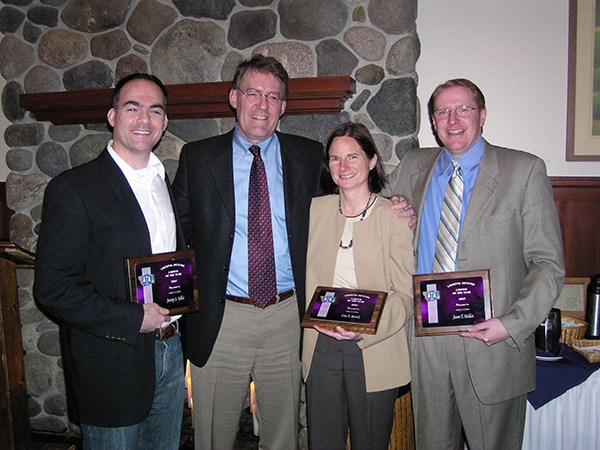 On March 13th and 14th, the Montana Association of Criminal Defense Lawyers  held its annual meeting and seminar at picturesque Chico Hot Springs in Pray, Montana. Over 60 criminal defense lawyers attended the seminar which was organized by President Daniel Donovan of Great Falls.

Donovan presented the 2007 MTACDL Lawyer of the Year awards at the dinner held in conjunction with the annual meeting.  Four criminal defense lawyers received this designation:  Lisa A. Banick of Bozeman, Joslyn M. Hunt of Helena, Jason T. Holden of Great Falls, and Jeremy S. Yellin of Havre.

Banick and Hunt were recognized for their successful defense in a death penalty homicide case, State of Montana v. Brandon Miller and John Lebrum, Montana Eighteenth Judicial District, Gallatin County.  The Miller and Lebrum case had received national attention with articles published in the Wall Street Journal and Sports Illustrated.  Banick and Hunt persuaded the Montana Supreme Court to rule that the death penalty could not be imposed because the State had not provided the defense with timely notice of its intent to seek the death penalty.

Holden and Yellin were recognized for their successful defense in a death penalty homicide case, State of Montana v.  Blair “Mickey” Little Dog, Montana Seventeenth Judicial District, Blaine County.  The first jury trial ended in a mistrial. During the second jury trial, Holden and Yellin negotiated the charge of deliberate homicide down to tampering with evidence and Little Dog received a sentence of 5 years in prison.

Lisa A. Banick is a partner in the law firm of Garrity, Avignone & Banick in Bozeman, Montana. She received a B.S. in Civil Engineering from the University of Virginia in 1981, and a J.D., magna cum laude, from New York Law School in 1984. She is a member of the New York, New Jersey, and Montana bars. Ms. Banick practiced law in New York City before moving to Montana in 1992. She focuses her practice primarily on criminal defense and civil litigation. Ms. Banick is a member of the Montana Association of Criminal Defense Lawyers and the National Association of Criminal Defense Lawyers. She is also an associate member of the American Society of Civil Engineers.

Joslyn M. Hunt has served with the Office of the Appellate Defender of Montana since July of 2006. She was previously with the Appellate Bureau of the Montana Department of Justice. In 2000, Ms. Hunt graduated from Montana Tech with degrees in engineering, chemistry and mathematics. After receiving her law degree from the University of Montana in 2003, she clerked for Montana Supreme Court Justice Jim Nelson and for United States District Judge Don Molloy.

Holden, who was raised in Havre, graduated from Havre High School in 1994. He obtained his undergraduate and law degrees from the University of Montana in Missoula. Holden previously served as an Assistant Federal Defender for the Federal Defenders of Montana. He is currently in a partnership with Jean Faure in Great Falls.

Yellin graduated from the Brooklyn Law School in New York. After clerking for District Judge John Warner, he has practiced law in Central Montana, including in Havre, Fort Benton and Great Falls. Yellin has experience handling court-appointed criminal cases in State and Federal court. Yellin’s office is currently located in Havre.

Congratulations to all the recipients for a job honorably and well done!