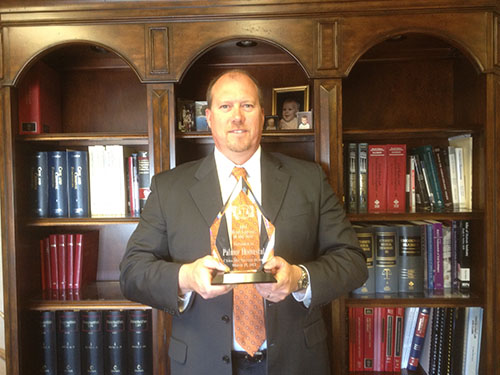 On March 15, 2012 the Montana Association of Criminal Defense Lawyers (MTACDL) honored Palmer Hoovestal of Helena as the 2011 Trial Lawyer of the Year.  The award was presented at the association’s annual conference shared with the Federal Defenders of Montana (FDOM) at Chico Hot Springs near Pray, Montana.

In presenting the award, MTACDL recounted portions of Mr. Hoovestal’s superlative professional career.  Noting that “his trial work has become the stuff of legend”, member lawyers described his passion and courage in winning an acquittal for civil rights lawyer and activist Tony Serra.  Only four years out of law school, Palmer skillfully presented a case that counted trial lawyer Gerry Spence and the Honorable Jack D. Shanstrom, federal judge, among its witnesses.

Palmer has been a member of the Criminal Justice Act (CJA) panel since 1991.  He has argued to the Ninth Circuit Federal Court of Appeals approximately twenty times, including in 2011 before Justice Sandra Day O’Connor, sitting on the Court by designation.

In 1998, Palmer was the co-recipient of the Trial Lawyer of the Year Award from the Montana Trial Lawyers Association for his tireless and successful work defending clients from the infamous 1991 Montana Prison Riot.

The list goes on, made all the more impressive by Palmer’s accomplishments outside the courtroom.  A proud veteran of the United States Marine Corps, he was an amateur boxer who won several state and regional titles and has a black belt in karate.  Ever defying convention, he is likewise an accomplished musician, playing both classical and flamenco guitar, and is fluent in both Spanish and French.  Through it all, he found time to raise six children with his wife and life partner, Shelley Newbury Hoovestal.

As noted by Federal Defender David Ness, “Whether retained or appointed, whether in state or federal court, Palmer is one of those rare individuals who embodies the highest virtues of our profession.  His courage and commitment to his clients serve as an inspiration to us all … Palmer stands out for his zealous professional advocacy and unselfish assistance to his colleagues.”

MTACDL congratulates Palmer Hoovestal as a most deserving recipient of its highest award.