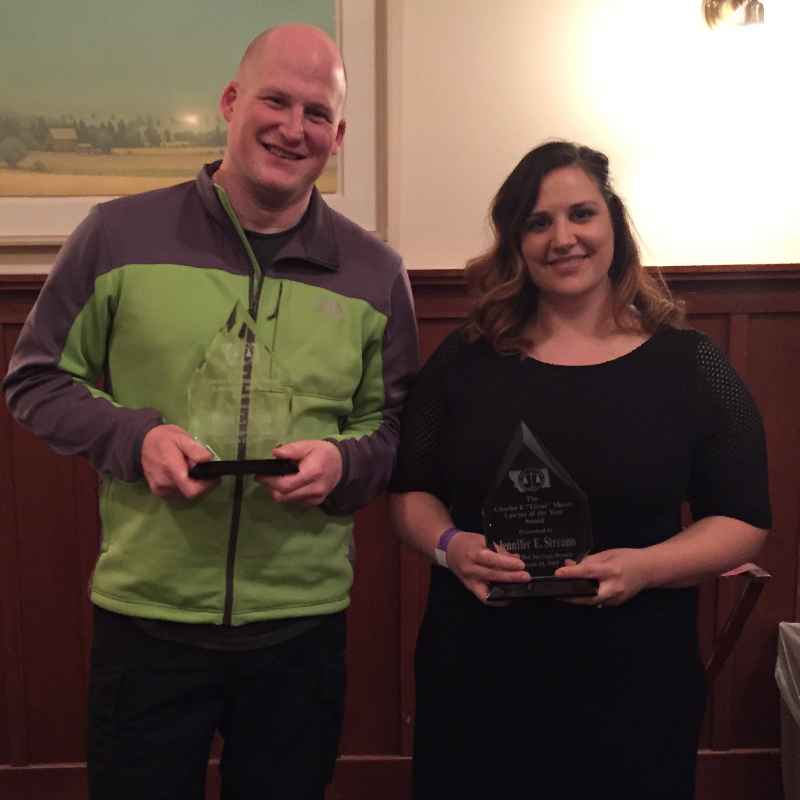 On March 14, 2015, the Montana Association of Criminal Defense Lawyers (MTACDL) added two (2) attorneys to the illustrious list of lawyers who have received the Charles F. “Timer” Moses Lawyer of the Year Award: Jennifer Streano and Brian Smith. These two attorneys have worked tirelessly over a number of years representing clients in some of the most challenging cases. However, it was their victory last spring in the deliberate homicide case of State v. Jasmine Eskew that warrants special recognition.

The story of State v. Eskew is a long, difficult tale. Ms. Eskew was a young Great Falls mother, and like many of our clients, she made a bad choice in men. Ms. Eskew’s six-month-old baby was beaten to death. The community of Great Falls was outraged, and Ms. Eskew was charged with killing her baby. Community interest in the case was intense and its sentiment scathing in its negative view of Ms. Eskew. Social media was an active player in the vitriol.

To make matters worse, the case was complex. Ms. Eskew’s defense sought to demonstrate that Ms. Eskew’s boyfriend was in fact the true perpetrator. This involved getting into evidence some facts regarding his abusive past, about which the defense learned only because the State provided substantial DPHHS records as part of discovery.

The defense involved reverse 404(b) prior bad acts evidence, controversial Rule 702/Daubert issues, and very challenging facts. After a lengthy jury trial, Ms. Eskew was acquitted of Deliberate Homicide, and only convicted of the lesser included offense of Assault on a Minor. This was, to say the least, a major victory.

The trial Court, Judge Sandefur, advised Chief Public Defender Bill Hooks that Jenn and Brian’s “combined effort in the defense closing argument was the most skillful, artful, compelling, and effective closing arguments I have ever seen in a criminal case in my 11+ years as a district judge”.

Subsequent to their success, Jenn has continued to work additional difficult OPD cases, trying another deliberate homicide case in December.  In the meantime she also assisted the training department with training new attorneys at the Boot Camp program and presenting on the Eskew case with Brian at the OPD annual conference.

And not too long after the acquittal, Brian moved into private practice in Missoula where he became an instrumental part of the defense in the highly publicized homicide trial of Marcus Kaarma.

Prior to 2014 Jenn also obtained another acquittal in a deliberate homicide case in Missoula – State v. Raymond Big Beaver.  There is more to say on that case, but there are very few Montana attorneys who have obtained two not guilty verdicts in two separate deliberate homicide jury trials.

Jenn has worked in the OPD’s Major Crimes Unit (MCU) for the past 6 years.  Prior to that she was a supervisor in OPD’s Helena office.  She began her career with OPD in July 1, 2006.

Brian worked for OPD from 2006 until 2014. As noted he is currently in private practice in Missoula.

Returning to Eskew, Jenn and Brian were clearly the power in the courtroom.  Every time something happened, everyone turned to the defense table in reaction.

They earned that power.  True to their craft, they challenged themselves as well as their courtroom opposition.  When they decided to bifurcate the closing, Brian struggled with the idea of acting like a "prosecutor" to present the factual basis for a "Conviction" of the boyfriend.

Together they strike a balance few defense attorneys are able to achieve - they are creative, innovative and willing to take risks.

Brian carries with him at trial a coin with an Edward Abbey quote - "Hate Injustice, Defy the Powerful, and Speak for the Voiceless."   This is something both he and Jenn genuinely believe. They are truly defenders of the accused.