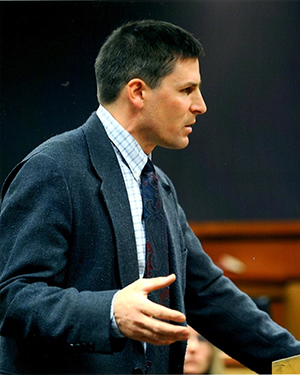 The 2015 Adams Award recipient has for more than twenty years believed the odds were stacked against defendants who could not afford lawyers.  The person we honor tonight works unbelievably well with Native Americans, with difficult clients, and is undeterred by complex litigation.  A reliable CJA panel attorney who takes every single case assigned no matter what the charge.  The award winner is creative and highly capable.  For example, despite a high quantity of meth, a client was sentenced to 60 months below the advisory guideline range even after the Judge refused to accept a binding plea agreement.  In an Assault on a Federal Officer case our Honoree obtained a misdemeanor disposition.  The Adams Award Winner has a Montana rancher's pioneer spirit   — working long hours, challenging the government, and sticking by people society has turned on  — a true model for all of us of what drives us to take on the most reviled in society.

Last weekend I watched “To Kill a Mockingbird” for probably the fifth time in my life.  A scene in the movie has always gotten to me.  It is after the jury has wrongly convicted Tom Robinson, simply because he was a black man.  The white court audience has left the Courtroom, but the Gallery for “coloreds only” is still full.  As Aticus Finch leaves, they all rise.  Aticus’ daughter remains seated, until the pastor says:  “Stand up Jean Louise, your father’s passing.”  Let’s all stand now.

For 2015, the selfless service of John Adams is best exemplified by – Matt Wald.