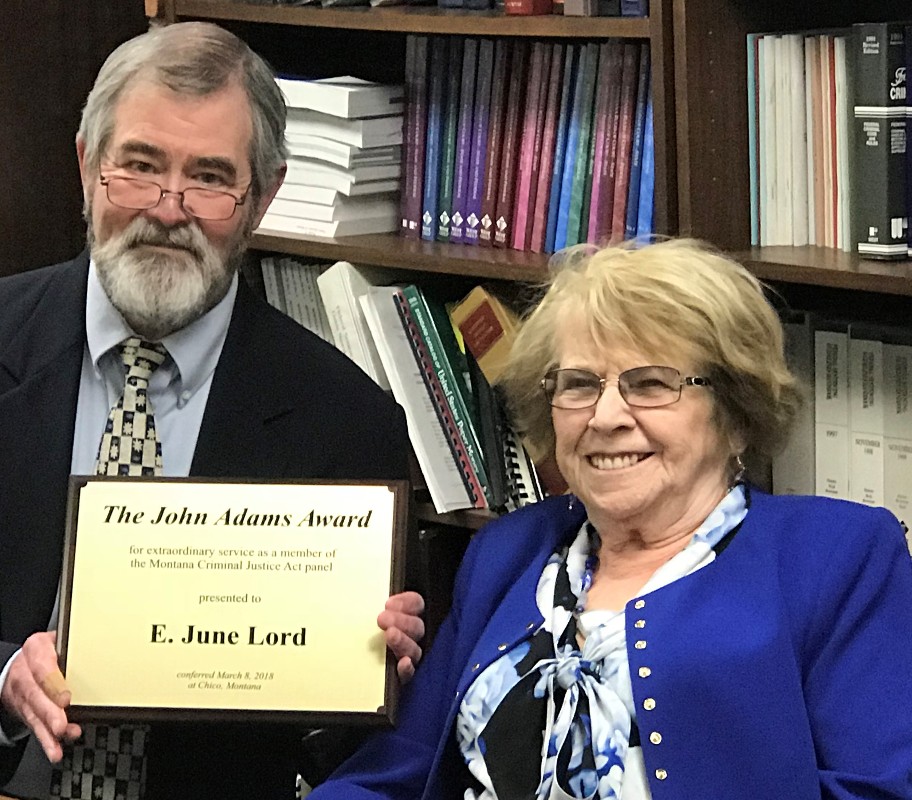 From Tony Gallagher's presentation of the 2018 John Adams Award in Great Falls on April 24, 2018:

Just over 25 years ago I sent a letter to our 2018 John Adams Award recipient.  The Federal Defenders of Montana was open for less than one year and I wanted all of the lawyers in the Great Falls legal community to join us at our office for an open house event.  From that first encounter, I knew that this person was an extraordinary attorney, dedicated to the Rule of Law with an established reputation for achieving favorable results in a variety of civil and criminal cases.  Working with incredible zeal, this lawyer has shown a particular dedication to appointed counsel clients and the cause of federal criminal defense.  The 2018 honoree has diligently applied vast experience to pretrial motions practice, trial work, plea negotiation and sentencing.

Many of the appellate successes the panel achieved arising from Great Falls cases between 2001 and 2012 were with this lawyer as trial and appellate counsel.  Fearlessly preserving issues in the most adverse circumstance, then fighting for what was right despite earning the ire of the trial Judge then in charge of this division.  This attorney interrupted a golf vacation and drove nonstop from Arizona for a hearing that the court refused to continue.   As Vann Arvanetes pointed out, when the Adams honoree calls to consult on a case, you better be ready for a long conversation because no legal or factual stone will go unturned, every trial strategy will be explored, and nothing will stand in the way of putting the client in the best possible position. Representing poor people in every division of the United States District Court for the District Montana, this lawyer is the Dean of the CJA Panel for the District, has never hesitated to take a case when called  – even the ones where the client has fired every other lawyer in the book.

The 2018 recipient of the John Adams Award is E. June Lord.