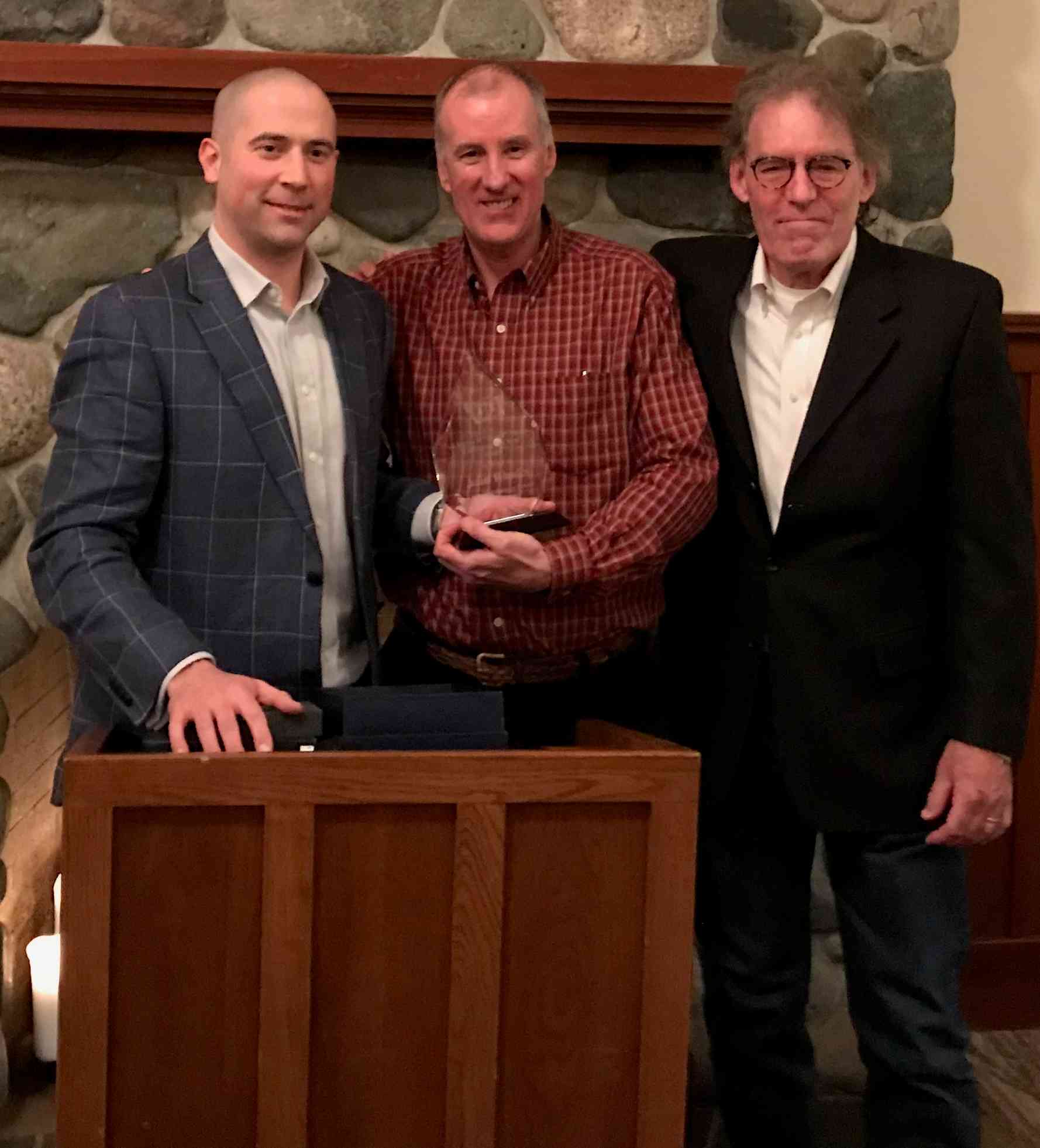 The following is adapted from the notes of award presenter Dan Donovan:

This year’s recipient is my colleague, co-counsel, co-author, mentee, and close friend. He was born and raised on the south side of Chicago—actually a southwest suburb, Naperville. His Montana connection is that his dad was born in eastern Montana, and went to the University of Montana, where he played basketball.

After high school, John went to a small college in Indiana, then on to Harvard law school. After law school, he clerked for Judge Gerald Heaney of the 8th Circuit Court of Appeals in Duluth, Minnesota. Then John got a job with a large national law firm, and requested assignment to the firm’s office in Great Falls.

He joined the CJA panel and was dedicated and enthusiastic from the beginning. John’s firm did some white-collar defense, and his boss wanted him on the panel so they would have access to FDOM’s resources, including the law library. He accepted his first CJA case and was working hard on it when he got the call for a second case, which he immediately accepted.

I can distinctly remember how happy and excited John was to be handling these two federal indigent criminal cases. Then something happened: his boss told John that he could handle only one CJA case at a time. He was devastated, angry, and extremely upset. This was the beginning of the end of John’s tenure with the big law firm. His heart was into representing individual people and fighting for their constitutional rights. He could hardly stomach representing big corporations, so John resigned from the big law firm, left Great Falls, and moved to Missoula to become a county public defender. His pay was cut in half compared to what he would have made with the big firm. I imagine he’d be earning 3, 4, perhaps $500,000 a year by now had he stayed.

But that was not and is not John Rhodes.

A couple of years later, John left the county to join FDOM as an Assistant Federal Defender in Missoula. Initially, I was his supervisor. I remember getting a call from Judge Molloy, who told us that he did not want this new lawyer, John Rhodes, in his courtroom without the presence of either myself, Tony Gallagher or Michael Donahoe.

So I made multiple trips to Missoula to attend John’s court proceedings. But I really did not have to do much supervising. in fact, I learned more by observing John than anything he learned from me. And within a few short months, Judge Molloy called and said that we no longer were required to supervise John. John and I tried a few cases together in Great Falls, but I am not going to tell war stories about those.

I expect that Peter will be talking about John’s role as a leader of the federal criminal defense bar in Missoula, so I will speak to his passion for representing individual people and fighting for their constitutional rights.

The first involves the right against self-incrimination.

Twenty years or so ago, FDOM filed an original action regarding sex offender litigation. We were concerned that sex offenders on supervision would be forced to incriminate themselves.

After Judge Molloy threw our case out of court, we carried on the fight on an individual case basis. John has been fighting and pushing this all these years.

Perhaps John’s biggest win was US v Antelope in 2005. The Ninth Circuit held that his client’s “privilege against self-incrimination was violated because [he] was sentenced to a longer prison term for refusing to” incriminate himself as part of his sex offender treatment. John has continued to litigate the rights of sex offenders subject to conditions of supervised release.

The second example involves the right to trial by jury.

In cases pertaining to the illegal killing of grizzly bears, John has again shown his perseverance and resolve. This is demonstrated by two cases 20 years apart: Paul Clavette and Brian Charette.

In 1998, the Ninth Circuit ruled in Clavette, my case, that the accused is not entitled to a jury trial in a killing of a grizzly bear case. After that, I gave up on this issue. However, John has pushed for a jury trial in all the grizzly bear cases he has had and continues to do so. He uses novel and creative arguments that I had never thought of.

Last year, in Charette, he argued at the University of Idaho law school in Moscow. I thought it was a good sign that one of the judges on his panel was from Alaska and another from Idaho. Alas, this panel ruled, again, that John’s client was not entitled to a jury trial. However, they reversed and remanded for a new trial because they found that the trial court erred in “applying an objectively reasonable standard to Charette’s self-defense claim”. The Ninth Circuit panel applied the holding from John’s 2017 grizzly bear case, US v Dan Whalen: “‘good faith belief’ standard [for self defense] ‘requires only a subjective belief in the need to protect oneself or others,’ as opposed to an ‘objectively reasonable belief.’” … “The subjective standard ‘is satisfied when a defendant actually, even if unreasonably, [893 f.3d 1176] believes his actions are necessary to protect himself or others from perceived danger from a grizzly bear.’ id. at 623.”

And on retrial less than two months ago, in January of 2019, although again with no jury, the judge found Brian Charette not guilty of taking a grizzly bear!!!

For these and many other reasons, John Rhodes is deserving of the 2019 Timer Moses Lawyer of the Year award.