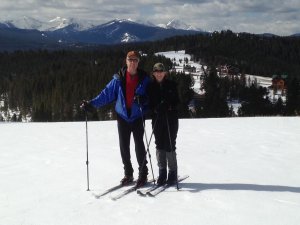 I was born May 9, 1958 in Gary, Indiana.  My father worked at U.S. Steel, and my mother was a school counselor and teacher.  I graduated from William A. Wirt High School in 1976.  I worked in the steel mills that summer.  I moved to Missoula, Montana in September to begin undergraduate studies at the University of Montana.  I left college in the spring of 1977 and worked as a gandy dancer on the Elgin, Joliet and Eastern Railway in Northwest Indiana, June 1977 through April 1978.

I returned to Missoula and found work as a framing carpenter beginning in May 1978 until I resumed my studies at the University of Montana in the fall.  I pursued a dual major in philosophy and economics, with emphasis on the evolution of philosophical and political thought, and economic systems, receiving my Bachelor of Arts degree in the spring of 1983.

During college I worked as a carpenter building houses in Missoula and on a farm in central Montana doing all manner of farm and ranch work.  Following graduation from UM, I took a year off from my studies and worked from spring of 1983 until spring 1984.  That summer I spent the two months prior to entering law school riding my bicycle in Europe.  I entered the University of Montana School of Law in the fall of 1984.  I graduated, with honors, with the Class of 1987.  I am admitted to the Montana Courts, U.S. District Court for the District of Montana, and U.S. Court of Appeals, Ninth Circuit.

My first job out of law school I worked as an associate attorney at the small law firm, Mullendore & Tawney, in Missoula.  I mainly probated estates and drafted business contracts.  In my one criminal case I gained an acquittal for my client in my first jury trial.

I liked the trial work and wanted more.  I took a position with the Missoula County Public Defender’s Office beginning in November 1988.  I spent the next four years representing clients in all manner of felony and misdemeanor cases, youths in juvenile court, mentally ill clients in commitment proceedings, and as guardian ad litem for children in dependency and neglect cases.  I tried over thirty cases to a judge or a jury during my years as a public defender.  I joined the National Association of Criminal Defense Lawyers in 1989.

I formed the law firm Smith & Thiel Law Offices with partner Matthew B. Thiel in January, 1995.  In October, 1996 I joined with 14 other criminal defense lawyers from across the State of Montana to form MTACDL.  I am a lifetime member.  I have held each of the executive offices, finishing my two year term as President in February 2003.

In June of 2000, I attended Gerry Spence’s Trial Lawyer’s College - a month long course at the college's ranch in Dubois, Wyoming, working with the best in the business to improve my skills as a trial lawyer.

I was retained in the fall 2003 by the ACLU to be an expert witness in its lawsuit against the State of Montana, wherein they alleged an inadequate public defense system.  As the immediate past president of MTACDL, I testified before the legislative subcommittee charged with studying model public defense systems and sponsoring legislation to overhaul Montana's system.  The Montana Legislature passed the comprehensive Montana Public Defender Act in 2005, and the ACLU agreed to dismiss its suit.

In 2003, I accepted nomination to the position of Secretary/Treasurer of the Montana Chapter of the Federal Bar Association, an organization of both civil and criminal lawyers who practice extensively in Federal Court.   I continue in this position.

Since 1992 I have served the UM School of Law as an adjunct faculty guest lecturer and panel participant in classrooms and symposiums on the subject of trial work and criminal law.

I am presently the senior partner at Smith & Stephens, P.C. in Missoula, practicing criminal defense with MTACDL members Colin M. Stephens and Briana E. Schwandt.  Our overarching philosophy at Smith & Stephens, P.C. is that we are here to serve people.  In order to do this most effectively we spend time getting to know our clients, so we can "get inside their hides," to feel what it is like to be a person accused by the government of committing a crime.  This stems from training at Gerry Spence's Trial Lawyer's College.  At the College we studied psychodramatic techniques geared toward bringing the client's story into the courtroom.  We were taught to take the time to really understand how it feels to be the people we are representing.  In this way we are able to pull their stories from our hearts, creating the probability the jury will feel it in their hearts as well.

As a lawyer defending people accused of crimes, I consider myself and others who work in this arena to be law enforcement officers of the highest order, because we seek to enforce the Constitution and the peoples' rights guaranteed by it.

University of Montana School of Law, 1987

Received the Emmett C. Angland Memorial Award at graduation given “to a senior who has demonstrated concern, conviction, and courage in the rendition of legal services” through the law school’s clinical program.

University of Wyoming School of Law

Faculty member since 2013 Advanced Trial Advocacy Institute held for a week each May at the University of Montana School of Law.

Courts and Other Organizations

Admitted to the Montana Courts, U.S.District Court, District of Montana, and U.S.Court of Appeals, Ninth Circuit.

Elected as Treasurer of the Montana Chapter of the Federal Bar Association.  Continues in this position.

Solo private practice consisting of same as above.

Associate attorney with the law firm Mullendore & Tawney in Missoula,Montana.  Practice consisted primarily of civil, business type work.  Tried first case to a jury in the Spring of 1988, resulting in an acquittal of client on criminal charges.

Adjunct faculty guest lecturer and panel participant in classrooms and symposiums held regularly at the University of  Montana School of Law on the subject of trial work and criminal law.